The Technical Debt is a powerful metaphor. It helps to explain in two minutes the stakes of code structural quality to anyone. Although it’s been around for quite a while, it’s has become very popular recently and pundits are still debating its definition.
For the sake of clarity, the definition I’ll be using is the one from Dr Bill Curtis:
«Technical Debt represents the cost of fixing structural quality problems in production code that the organisation knows must be eliminated to control development costs or avoid operational problems.»
Before this measure was introduced, developers had no means of explaining to their management the consequences of their decisions and the sighs, the rolling of their eyes, the shrugging of their shoulders and warnings such as «the whole damned thing needs to be rewritten from scratch» may have often been exaggerated and were not taken seriously.
Until they were true and it was too late.
So the technical debt is a huge step forward adding a new dimension to improved IT governance but for this measure to be efficient we should be able to act upon it and, for instance, try and fix that big legacy code that is crippling our organisation’s agility.
But it’s not that easy.
Because at the level of maturity where there are many structural issues in the code, tests are usually long gone. And truth be told, requirements and test data are also often missing.
It’s the result of the spiral of debt:  the worse the quality of an application, the more difficult it is to improve it. So the path of least resistance is to let quality degrade with each new release. The process stops when the application has reached the following steady state: a big black box with no test assets, no requirements and a generous helping of structural code issues. 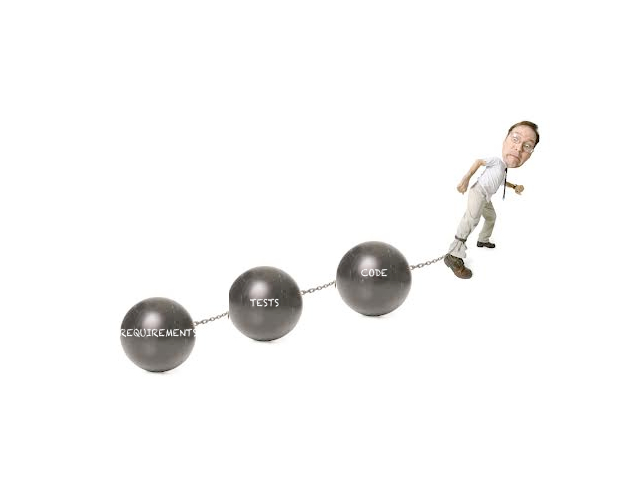 Thus there are several creditors for the technical debt and there is an order with which they need to be paid off: requirements first, then test assets and code quality.
Sounds like rework?
That’s because it is.