In 2006, Gartner introduced the concept of ‘Dead Money’ to characterise the subset of IT budgets devoted to keeping the lights on as opposed to contributing to business growth or enhancing competitive advantage. At the time, the amount of average ‘Dead Money’ was estimated as 80% of IT budgets: eight dollars out of ten.

I haven’t come across a set expression for the remaining two dollars so I’ll stick my neck out and offer this one: ‘Pocket Money’.

Thus we can write the first law of IT budgets: 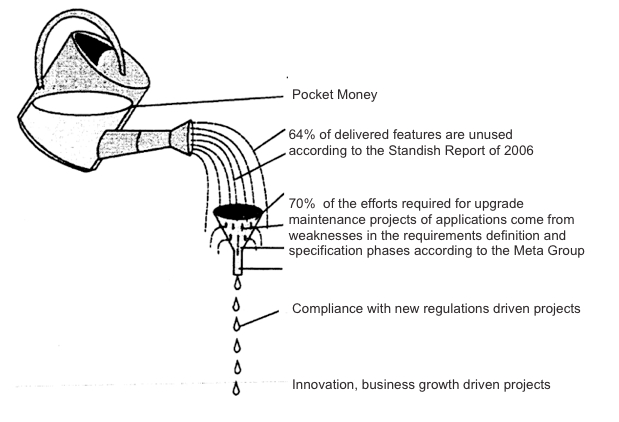 When you are overweight it’s of common knowledge that you have to do two things to loose weight: change your eating habits and exercise. One without the other will not give you the expected results.

Similarly, in order to efficiently fight back ‘Dead Money’, organizations need not only to take action against the causes of their overinflated ‘keeping the lights on’ budget but also to change the way they are doing new software projects because inefficient projects generally lead to high maintenance software. In other words, just like greasy hamburgers will eventually become fat, wasted ‘Pocket Money’ is ‘Dead Money’ in the making.

This looping mechanism is what drives the ‘Dead Money’ ever higher. This phenomenon is nothing new but what is unprecedented is the level it has reached in a context where IT budgets are under much pressure due to the global crisis and their ensuing new regulations.

That is why the world needs better software projects now.

Forward
"To err is human, but to really foul things up you need a computer."
Paul Ehrlich